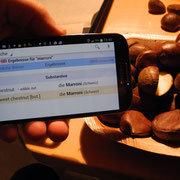 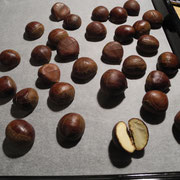 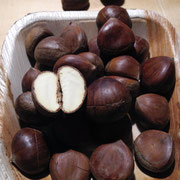 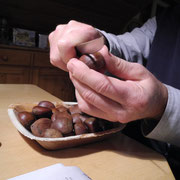 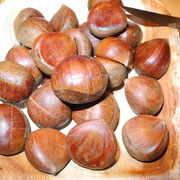 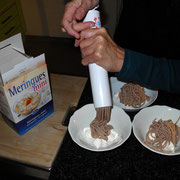 Chestnuts are shiny brown nuts whose thick casing has long, sharp, needle-like spikes (burrs). There are usually two to four nuts per casing. Unlike other nuts, chestnuts have a high starch and water content but low protein and fat levels. They've never been as popular in British kitchens as in Continental ones, but they're a versatile and flavourful storecupboard ingredient. Chestnuts are available fresh, ground, dried, puréed or vacuum-packed.

Ground chestnut (chestnut flour) has a sweet strong flavour and a slightly pasty texture when cooked. Dried chestnuts lend a smoky flavour and robustness of character to soups or stews. There are two types of puréed chestnut: sweetened and unsweetened, which are used in sweet and savoury dishes respectively (the sweetened version is used in the classic Mont Blanc). Vacuum-packed chestnuts are of variable quality. The best are made from whole, unbroken nuts and work well in soups, stuffings, stews and sauces.

The chestnut group is a genus (Castanea) of eight or nine species of deciduous trees and shrubs in the beech family Fagaceae, native to temperate regions of the Northern Hemisphere. The name also refers to the edible nuts they produce.

The chestnut belongs to the same family as the oak and beech.

The four main species are commonly known as European, Chinese, Japanese and American chestnuts, some species called chinkapin or chinquapin:

Chestnuts should not be confused with horse chestnuts (genus Aesculus), which are not related to Castanea and are named for producing nuts of similar appearance, but which are mildly poisonous to humans, nor should they be confused with water chestnut (family Cyperaceae), which are also unrelated to Castanea and are tubers of similar taste from an aquatic herbaceous plant.Other trees commonly mistaken for the chestnut tree are the chestnut oak (Quercus prinus) and the American beech (Fagus grandifolia).