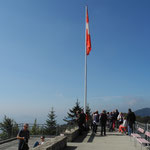 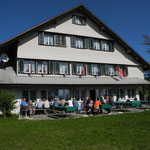 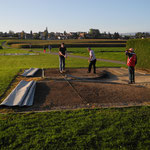 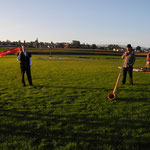 Switzerland has long had a distinct cultural identity, despite its diversity of German, French, Italian, Romansh and other ethnicities. Religious and folk music dominated the country until the 17th century, with growth in production of other kinds of music occurring slowly.

One of the oldest varieties of folk music was the Swiss song Kühreihen,

The alphorn or alpenhorn or alpine horn is a labrophone, consisting of a wooden natural horn of conical bore, having a wooden cup-shaped mouthpiece, used by mountain dwellers in Switzerland and elsewhere.

Similar wooden horns were used for communication in most mountainous regions of Europe, from the French Alps to the Carpathians.

Volkstümliche Musik (German for "folksy/traditional/popular music") is a modern popular derivation of the traditional Volksmusik genre of German-speaking countries in general and their Alpine regions in particular. Though it is often marketed as Volksmusik, it differs from traditional folk music in that it is commercially performed by celebrity singers and concentrates on newly created sentimental and cheerful feel-good compositions.

Volkstümliche Musik is sometimes instrumental, but usually presented by one or especially two singers and is most popular amongst an adult audience in Germany, Austria, and Switzerland, but also in adjacent South Tyrol (Italy), Slovenia and Alsace (France).